Ultimate X is going to be bigger and badder this year than it ever has before! The venue change means that the size of the event is going to blow your mind. You can still expect the best in local and international athletes at Ultimate X’s new home: Grand Arena, GrandWest Casino on the 27th and 28th February 2015.

You might already be familiar with this extreme sports event as it’s already in its 6th installment! If you’re an Ultimate X newbie though, you can expect some insane showcases, stunts and competitions in: FMX, BMX and Skate. This year they’ll be competing for a prize of over R150 000.

The 2015 festival brings with it a fresh flair as the Grand Arena is transformed into Africa’s first indoor, floodlit, pyrotechnical lazer extreme sport showdown. When asked about the 2015 event, Ultimate X Owner and Master Mind Markus Museler said, “We are stoked to be taking Ultimate X into the Grand Arena as this is going to change the face of Action Sports in South Africa. Spectators will experience a never before seen Indoor Action Sport BLOWOUT with, as always, Africa’s Best Skate and BMX Park. There are limited seats available so be sure to get yours now!”

Doors open at 18:00 and close at 22:00. Pre-purchased tickets are available at Computicket ranging from R150 – R250. Children under 10 years old – tickets range from R100 – R175. Tickets will also be made available at the gate and food and full bar services will be available with ample parking. 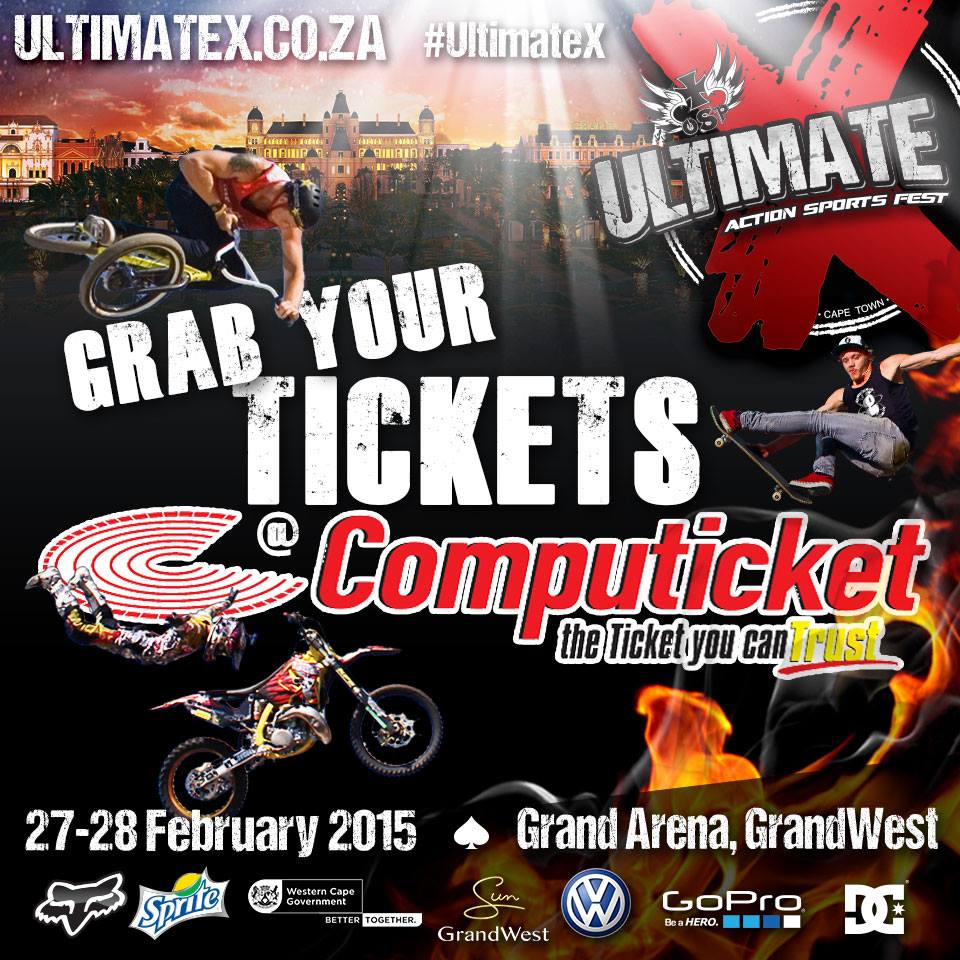 The rad dudes from Ultimate X have given me a pretty amazing hamper, worth +/- R1,750 to give-away to one lucky reader [merchandise from SkullCandy/NESS, Sprite, Sessions and Red Bull] which also includes 2 full weekend passes for you and a friend to join the fun!

Make sure you have joined the event on Facebook [here] and liked the Ultimate X FB page!

I’ll be the first to admit that i’m not a massive follower of either cricket or rugby – but i’m obviously fiercely patriotic and will always support our boys in green. No matter the sport!

It hink it’s pretty hilarious/genius that the rugby team is willing to hang its pride up and play a completely different sport against guys who are paid to play for a living. It’s worth mentioning though, that i would pay a significant amount of money to see the cricket team play  rugby against the Springboks!

This T20 game – The Nelson Mandela Legacy Cup – is a celebration of Madiba’s legacy the best way South Africans know how…through sport. Something which Madiba was adamant about using to unite our very broken country.

Most of the household names will be there, led by their respective captains: AB and Jean de Villiers. A signing session with selected members of both teams will also take place as well as the popular Hit-a-Six competition.

It takes place on the 5th of December at Bidvest Wanderers. Tickets for the match are available from www.ticketpro.co.za and range from R90-R200. The fun starts at 3pm and the game is at 6.30pm.

I have got 4 tickets to the Nelson Mandela Legacy Cup to give away. All you have to do is include ALL of the following THREE elements in a tweet:

I had my first taste of Rekorderlig about 2 and a half years ago in the UK. They have a crazy range of ciders available to them in Europe, but Rekorderlig seems to come out on top. The boyfriend’s mom even made sure she bought some for me the last time we visited a few months ago. We ended up trying to bring a couple of bottles back into the country, but they got smashed inside our luggage at OR Tambo.

The good news is that i don’t have to worry about sketchy transportation and having to ration two 500ml bottles out over the course of a year – because Rekorderlig is now in SA! If you’ve never been a cider person, i would challenge you to trying this specific cider out. The three flavours that have been brought to SA are the 3 staples in their range, and each of them tastes like heaven: Strawberry-Lime, Wild Berries and Pear!

Rekorderlig is still brewed in the small Southern Swedish village of Vimmerby, and made from natural ingredients – no syrups are used! You might also be wondering why Rekorderlig comes in 500mL glass bottles? Was it a carefully crafted ploy? Was it a huge amount of research that pointed to it? Neither! The reason is simple, Rekorderlig was first served in a 500mL bottle due to the Swedish recycling restrictions. All Cider was served in 500mL bottle to aid in the government’s commitment to create a green Sweden. Which is pretty sweet!

Just in case you want to get your hands on some of this deliciousness, here is a handy guide so you know where to get it:

I’ve got a mixed case of Rekorderlig to giveaway, all you have to do to enter is follow the steps below:

Step 2) Answer the following question: What is your favourite flavour? (available in SA)

Step 3) Tweet the following with your answer (including the link):

My favourite @RekorderligSA flavour is […]. What’s yours? Enter to win a mixed case with @StephanieBe here: http://bit.ly/1sinhgO

Just 2 more sleeps until The Joburg Festival of Beer kicks off at Pirates Sports Club on the 27th & 28th September!

There will be a super impressive selection of 160 beers from around the country and abroad including brews from the likes of Swagga Brewery, Belgian Beer, Just Brewing, Brauhaus Am Damm, Dog & Fig Brewery, Soweto Gold and Darling Brewery, to name just a few!

In Festival of Beer tradition, the biggest beer judging contest in the Southern Hemisphere will take place live from the festival, where the best beers on show will be decided by a panel of carefully-selected judges – including beer connoisseurs, beer writers and brewers on the Saturday session. Winners will be announced in the following categories:

If you don’t have tickets yet visit www.webtickets.co.za! Tweet them at @FestofBeer #GetBeerFit and join in on the beer banter! Visit the website for more details at www.joburgfestivalofbeer.co.za.

I have got a set of double tickets to giveaway to the Festival Of Beer this weekend! Follow these steps to enter:

Step 2: Tweet the following (MINUS the quotation marks, and including the link) –

It’s weird how almost over-night the flowers in our garden started blooming, and i no longer needed to make a hot water bottle to curl up in bed with every single night. I am loving the blossoms, and the sweet smell of Spring. Celebrate the warmer weather with Sir Juice!

I have got 3 x slushie makers and 9L of Sir Juice juice to give away so that you can enjoy beautiful Spring days with the perfect drink.

“I want to win my own slushie maker and celebrate Spring, courtesy of @SirJuice_ & @StephanieBe! Enter here: http://bit.ly/1tWn3cd”

I will be making 3 people very happy, each getting their own slushie maker and 3L of Sir Juice juice. Winners will be drawn by the end of the week.

Sir Juice have recently added 2 new flavours to their EPIC fruit juice lineup – Harrismith Apple and Pink Lemonade. I am not someone to shamelessly punt products that i don’t believe in, so you need to trust me when i say that this company is one worth supporting. They’re a proudly South African company run by 3 brothers and their “sister from another mister”. They are all passionate about their business and making sure that they produce a quality product as well as a sustainable one.

END_OF_DOCUMENT_TOKEN_TO_BE_REPLACED

Neon Run is heading to Jozi on the 17th of May 2014! Essentially is a 5km fun run/walk/crawl/prance, through different glow zones, and will end in a crazy music festival with: Chris Taylor, Dean Fuel, ShortStraw, The Kiffness and DODGY UNCLE Roger Goode!

Besides the awesome music, there will be fire and poi dancers, food stalls and (of course) a fully stocked bar, with loads of place to sit down, relax, and rest your weary legs.

Colourful glowing paint and glow sticks will be available at the event, and remember to wear any colours that glow, like neon and whites. There’ll be spot prizes on the day including a weekend away at the Fire & Ice 4 Star Hotel and other giveaways.

All you have to do to win a set of double tickets to Neon Run in JHB is tweet the following:

Hey @StephanieBe, I’m ready to get my glow on in Jozi this weekend at @NeonRunSA! Details: http://bit.ly/SZ1Z93